Custom Orthotics – Why do you need them and what are the benefits?

What Is A Custom Orthotic?

A custom orthotic is a device designed to align the foot and ankle into the most anatomically efficient position. They look like insoles, but are biomechanical medical appliances that are custom made to correct your specific foot imbalance. Custom orthotics work on your feet much like glasses work on your eyes – they reduce stress and strain on your body by bringing your feet back into proper alignment. The plastic body of the custom orthotic helps to re-align the foot by redirecting and reducing certain motion that takes place during the gait cycle. Custom orthotics fit into your shoes as comfortably as an insole – and they have the advantage of having been made from precise imprints of your feet.

The symptoms of poor foot mechanics can include any one of the following:

Should I Wear My Custom Orthotics All The Time?

The longer you wear your custom orthotics the more benefit you will get out of them. If your daily activities vary to the extent that you change your footwear, then you should have a second pair of custom orthotics designed for that specific activity. (I.e. going to the gym after work)

Why Do My New Custom Orthotics Feel Uncomfortable?

Will My Muscles Get Weaker Wearing Custom Orthotics?

Custom orthotics will not reduce muscles tone. They will help position your foot so you will be using the right muscles at the right time, minimizing fatigue and allowing your muscles to be used more efficiently.

Achilles Tendonitis is an inflammation of the common tendon of the gastrocnemius and soleus muscles of the posterior compartment of the leg.

Patients that have equinis deformity and/or run up-hill are candidates for this disorder. As the tibia moves over the foot, the ankle joint needs to be able to dorsiflex at least 10 degrees. If this is not possible, due to tightness of the aforementioned musculature, the tissues of the tendon can be damaged. In addition, it is thought that over-pronation may reduce the blood supply to the area by “wringing out” the arterial blood supply to the tendon. This is due to the twisting movement of the tendon associated with over-pronation of the foot. 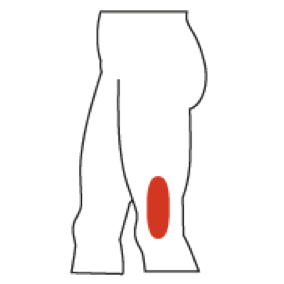 The iliotibial band which is a thick extension of the tensor fascia latae muscle slides over the lateral epicondyle. Iliotibial Band Syndrome is an inflammatory reaction at the side where this sliding occurs. 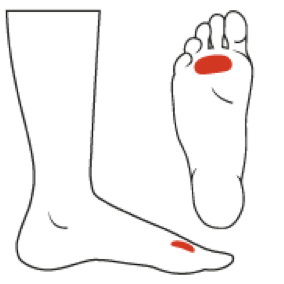 Metatarsalgia is not an injury; it’s actually a symptom or a group of symptoms. These may include pain in the ball of the foot, with or without bruising, and inflammation. It is often localized in the metatarsal heads or it may be more isolated, in the area near the big toe. One of the hallmarks of this disorder is pain in the ball of the foot during weight-bearing activities. Sharp or shooting pains in the toes also may be present, and pain in the toes and/or ball of the foot may increase when the toes are flexed. Accompanying symptoms may include tingling or numbness in the toes. It is common to experience acute, recurrent or chronic pain as a result of this problem.

Metatarsalgia develops when something changes or threatens the normal mechanics of the foot. Ultimately, this creates excessive pressure in the ball of the foot, and that leads to metatarsalgia. Some of the causes of metatarsalgia include: 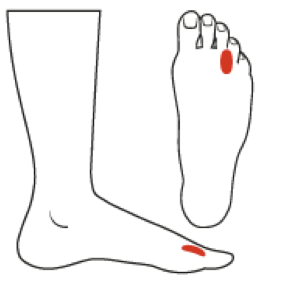 Morton’s Neuroma is a thickening of the tissue that surrounds the intermetatarsal nerve leading to the toes. When the nerve becomes squeezed and irritated, it causes painful symptoms. Neuroma patients occasionally complain of a “pins and needles” sensation that spreads through their fourth and fifth toes, or of a feeling akin to hitting their “funny bone.”

A neuroma can occur in response to the irritation of a nerve by one or more factors: 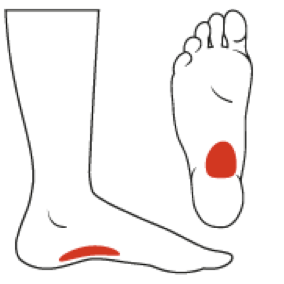 Plantar fasciitis is an inflammatory condition that occurs where the plantar fascia attaches to the medial tuberosity of the calcaneus.

Over-pronation results in a constant tugging of the aforementioned attachment site. Inflammation then results from this constant insult to the local tissues. When the patient is off-weight bearing, scar tissue begins to repair the site of injury. When the patient resumes weight-bearing, the scar tissue is torn resulting in acute pain. This explains why patients with this disorder typically experience the most pain when they get out of bed, or stand after a period of sitting. 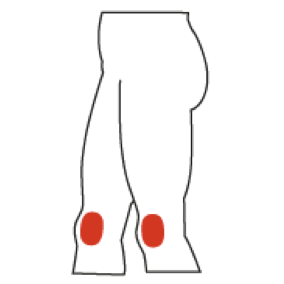 Runner’s Knee is a general term referring to pain around the front of a runner’s knee.

If the pain is anteromedial in location, the source of the problem may be over-pronation. The internal rotation of the tibia associated with over-pronation, may cause the knee to fall into a functional valgus orientation during the stance phase of gait. This in turn will compromise the ligaments on the medial aspect of the knee. Furthermore, the abnormal motion will result in abnormal pressures behind the patella, leading to a more specific knee malady referred to as chondromalacia patella. 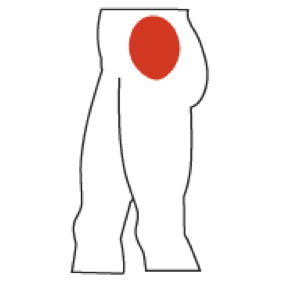 Sacroiliac syndrome is a painful inflammatory condition of the sacroiliac joints. The patient generally experiences pain in the buttock and thigh regions. It is typically aggravated by sitting for long periods.

Quite frequently it is caused by an injury such as would be sustained by a fall on the buttocks or during a lifting activity. However, there is some evidence to suggest that a chronic irritation from abnormal foot mechanics is also a possible cause. When a foot over-pronates, it creates a tendency towards internal rotation of the lower limb. Due to the anatomy of the hip joint, this internal rotation translates into an extension of the pelvis (PSIS’s rotate upward while ASIS’s rotate downward). If the mechanics of the feet are not symmetrical, then conflicting rotations may occur at the two sacroiliac joints. This appears to set up a chronic irritation of these joints leading to the inflammation.

Both of these muscles are involved in slowing down pronation during the stance phase of gait. Tibialis anterior functions early in the stance while Tibialis posterior functions a little later. If the patient over-pronates or pronates too rapidly, either or both of these muscles may be called upon to work harder than normal. As a result, fatigue sets in, leading to inefficient force production which leads to micro-tearing of the soft tissue and therefore and inflammatory reaction. Since the muscle is wrapped in a fascial covering, the swelling that occurs from the aforementioned problem is restricted by this covering. Beyond the fact that much pain results from the entire process, the pressure within the fascial covering can be sufficient to “choke-off” the blood supply to the involved musculature, further added to the insult on the tissue. In severe circumstances the swelling can be severe enough to damage the deep peroneal nerve resulting in a permanent “foot drop,” as this nerve supplies the dorsiflexors of the foot. The scenario that typically brings on “shin splints” is a sedentary individual that suddenly starts running or walking long distances. When that individual is also an over-pronator, the combination of having weak muscles from lack of activity and having this biomechanical fault increase the likelihood of injury. Even changing the type of shoe worn during walking or running can be sufficient to increase the pronation of the subtalar and transverse tarsal joints and lead to tissue injury.

A massage is relaxing for sure, but when performed by a registered professional (RMT) it can do so much more than just relax! Here are some other reasons to book your appointment today! Dr. Michelle Salga – Doctor of Naturopathic Medicine and Bio-Identical Hormone Therapy Practitioner

A massage is relaxing for sure, but when performed by a registered professional (RMT) it can do so much more than just relax! Here are some other reasons to book your appointment today!

As a THANK YOU for all the hard work our parents and caregivers put in on a daily basis, we would like to offer 10% off all services for parents and legal guardians from May 8th-15th, 2022.

Upon booking, please mention the code PARENT10, and the discount will be applied on the date of treatment.

*Disclaimer: No rain checks. This offer cannot be combined with any other promotions. Can only be redeemed by parents, parents-to-be, and legal guardians.

This will close in 20 seconds